Gee, only two days after the release of Useless Account – somehow the conceptual nirvana of Web 2.0 (currently more than 6000 people are euphorically doing nothing) – Yahoo! released this weeks second major milestone of the web: pipes 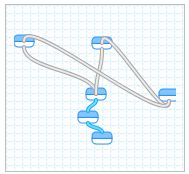 Pipes is a hosted service that lets you remix feeds and create new data mashups in a visual programming environment. The name of the service pays tribute to Unix pipes, which let programmers do astonishingly clever things by making it easy to chain simple utilities together on the command line.